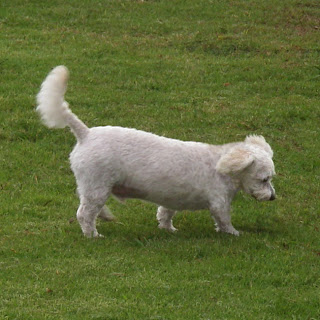 I decided some 30 years ago I would never again own a dog, and true to my word, I still do not own a dog, but I have a dog—a part-time dog.  Our neighbor has a dog that my wife walks every day.  Biggie is a white dog.  After that, who know what he is?  He appears to have a mix of Bichon, Poodle, Shizu, and Dachshund.  His curly white coat looks like wool (sheep dog?).  He is very low to the ground and very, very long.  And he has a checkered past.

Our neighbor’s mother found him as a pup in Mexico a few years ago.  She was visiting in Juarez when someone asked her if she wanted a “genuine French poodle.”  No one was fooling anyone, but she took him anyway.  When she passed away, the dog was passed to various family members in Texas and New Mexico, but it wasn't working out for anyone.  There was even some talk of sending him to the pound.  Finally our neighbor brought him to her home in California. 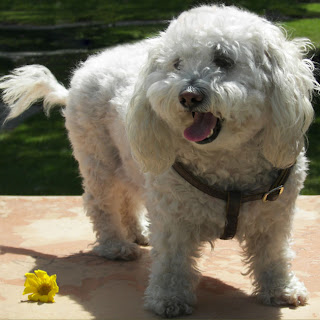 It’s been an interesting year.  At first Biggie was untrusting and aggressive, but patience (not mine) and attention (not mine) began to turn him around, and I really give my wife credit for this.  I wanted nothing to do with another dog.  But he was a dog, and I can’t resist a dog.
Biggie definitely belongs to our neighbor first and foremost.  My wife is number two on the list, and I am at the bottom of the pecking order, but I don’t mind.  I get to enjoy him, and then he goes to someone else.  I know he is not mine and never will be, and I like this.  I get the best of having a dog around, and at the same time I don’t have to clean up after him (but I do), I don’t have to walk him (but I do), I don’t have to feed him (but I do), and I don’t have to pay the vet bills (and I don’t).
Yes, this is the way to have a dog.  Even though it took me over half a century to figure it out, I finally got it right.
Posted by DGLloyd at 11:03 AM