Recently my wife and I took some time to browse through a few antique boutiques, thrift stores, and just plain junk shops.  I grew up with many of the things in these stores as everyday items in my home, so basically I found it to be a trip through memory lane.  But there are always surprises and delights to be found that jog my thoughts in unexpected ways.  One item I saw was a rather large neon green ceramic snail with the shell encasing a clock in its spiral.

Many thoughts went through my mind almost immediately.  My first thought was, “Oh, man that's ugly!"  Then I noticed it was chipped, cracked, and crackled, and I thought, "Who would ever buy that!”  I reached over and looked at the price tag and thought, “!#@$%&*”  I also had a few other thoughts about the absurdity of this thing, but then it dawned on me that this is the perfect representation of waiting on the Annual Wild Game Feed at Irvine Lake to arrive each year.

On the surface time moves forward at a constant rate with no measurable change in pace.  But there are times when it seems to move so slowly there is almost no perception of movement.  One of those times occurs for me about halfway through the year--not the calendar year, but the Wild Game Feed year.  This halfway point falls on the third Friday in March each year as the Feed is always on the third Friday in September.  From this day in March time moves forward so slowly I find it difficult to even notice.

Am I alone in this?  Does anyone else notice how time just seems to slow to a snail’s pace while waiting for the Feed?  On the plus side, this gives me plenty of time to prepare for the biggest and best man feast on planet earth.  On the minus side, it’s still six months away.  I’ve passed through this doldrum over twenty times, and I know the snail will eventually reach its destination, but the Wild Game Feed is still six months away.  Six long, slow moving, snail crawling months!

There is, however, an event much closer in time involving the Annual Wild Game Feed.  It’s the mailing of the ticket order forms.  That one usually happens about the end of May or the first part of June each year.  I hope you are saving your money guys, because when the forms arrive, they need to be returned immediately.  There can be no hesitation, or there will be no Game Feed for you this year.  The Feed sells out within days every year, and to hesitate is to miss out.  Then the snail will haunt you for an entire year.

Whether snail time is long or short, this year’s Annual Wild Game Feed will happen on Friday, September 20, 2019.

See you at the Feed! 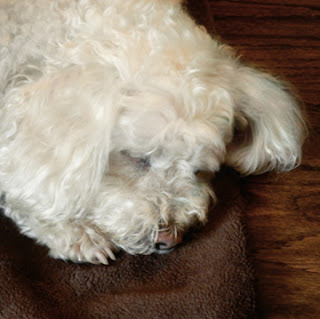 I’ve received several inquiries as to when I’m going to post again, and I apologize for waiting so long.  I’ve been rather busy with a little white doggie and simply forgot about my writings.  Sorry.  But Biggie is just too much fun.

To me it is simply amazing that Biggie has been in my life for eight years.  He may be my part-time dog, but he is still a large part of my life.  There has been much to overcome for both of us, but it keeps getting better.  Eight years ago, I wanted nothing to do with him simply because I didn’t want to get attached, as I knew I would.  That quickly changed, and now I find it difficult to think of letting him go.  Hopefully that is still many years away.  Biggie is twelve years old now, and this summer he will turn thirteen, but I’m counting on many more years.

A couple of weeks ago Biggie came for a visit.  He stayed until last night before returning home to his mom, but during his stay with my wife and me he expected to be highly entertained.  Actually he provided most of the entertainment.

Biggie demands breakfast be served at exactly 6am every morning, and he understands it takes me about 15 minutes to wake up and prepare his breakfast.  Therefore, at 5:45 I get the wake-up call.  It starts with a simple hand lick.  Apparently I sleep with one hand over the edge.  At first I’m just hoping it was a dream, and I try to go back to sleep, but Biggie isn’t fooled.  The hand licks now include a few hind leg scuffs.  Then comes the front leg pawing.  When that doesn’t work, I get the dancing.

By now my eyes are open, and he sees me watching him.  Every dance is different.  My favorite is the twist where he quickly turns back on himself (first right, then left) a few times.  This is followed by the dogtrot where he prances back and forth across the room. Then there is the dog hop where he literally hops around the room.  Biggie has his own versions of the funky chicken (funky dog), the jitterbug (jitterdog), and the boogie-woogie (doggie-woggie).  And the list goes on.

Since I’m enjoying the dancing more that getting up, Biggie now resorts to force.  My hand now gets a set of teeth attached to it (not hard, but he won’t let loose either), and Biggie will start to pull me out of bed.  The moment my feet touch the floor, he lets loose of my hand and starts to nip at my heels to herd me into the kitchen.  Once I’m in the kitchen he backs off as breakfast is prepared.  But if I try to leave the kitchen before he eats, he will block the door and not let me through.

I usually go straight to my computer while he is eating, so as soon as he is finished, he finds me and stares at me until I pet him.  And pet him.  And pet him.  Now it’s time for him to take a walk.  I get dressed, I put his walking harness and leash on him, I take him to the door, I open the door, he looks outside, he turns around and runs under the bed.  I go back to the computer.  I know Biggie needs a walk.  Biggie knows he needs a walk.  Biggie wants my wife to take him.  My wife is still asleep, so Biggie decides to wait.  Apparently his walks with my wife are more fun than his walks with me.

Afternoon rides in the car are not just expected, they are demanded.  There was a time when I could put him in the car and take him around the block.  He would be a happy dog with just a short ride, but those days are over.  Long over.  Now he isn’t happy until we run out of gas.  Either that or I take him to a park where he can explore for a couple of hours.  And I had better not take him to the same park twice in a row.  Thank goodness there are more than twenty parks within a few miles of home.

His favorite park is the beach at White Point less than 5 easy miles from home.  It isn’t the classic sandy beach, but a rocky shoreline with old broken up concrete slabs and retaining walls from a 1920’s bathhouse resort.  It is filled with tide pools and shallow flat areas with almost no wave action.  Perfect for Biggie.

Biggie has always had a fear of water.  When he first came our direction we had a small children’s plastic wading pool.  We put about 4 inches of water in it, and tried to place Biggie in the water.  I’ve never known a dog to exhibit such fear.  I won’t go into details, but we realized there was a big problem.  It took years to get him to trust us when just giving him a bath.  We could take him to a nearby dog beach, and he enjoyed playing in the sand and with the other dogs, but he would not go near the water.  However, at White Point Biggie won’t stay out of the water.  Go figure.  And he still hides at bath time.  And he will not step in a water puddle on his walks.

The past two weeks were filled with Biggie Adventures, and I found myself quite occupied with being entertained by entertaining Biggie.  I’ll do my best to keep writing, but if there is another lapse in my postings, somehow Biggie will be responsible.
Posted by DGLloyd at 9:09 AM No comments: